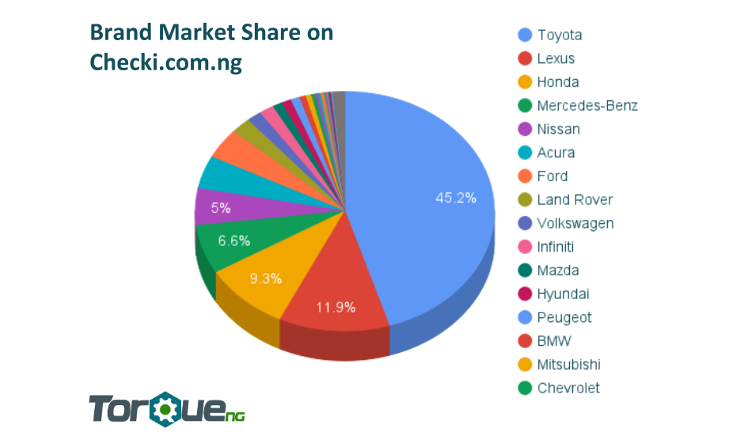 Tracking actual data of cars in Nigeria to find the most popular used cars is a dead end task as there are no systems in place to help track the sales and gauge consumer preference using verifiable metrics. Most people searching for the most popular used cars in Nigeria have to rely on anecdotes to gauge the pulse of the market.
However thanks to the advent of online car listings like Checki.com and Carmudi.com, we are a few steps closer to having a quantifiable platform to measure what cars are popular with Nigerians. For this exercise we are going to use use data of listings collected from both sites in June 2016 as guidance.
Disclaimer
This is not a accurate account due to the following reasons;
Regardless of the shortcomings, this can provide a starting point picture from where we can build upon. We are going to cover the Two most popular online car listing sites,

Most Popular cars on Checki

In terms of automotive brands, the chart below shows the most popular listings on Checki’s website by marketshare. We can see that Toyota dominates with 45.2% with Lexus coming in second with 11.9% followed closely by Honda with 9.3%. Mercedes-Benz and Nissan round out the top 5 brands.

In terms of Individual car models, the chart below sheds light on which models are the most popular. The Toyota Camry reigns supreme with 3630 listings followed by the Lexus RX with 2678 and the Toyota Highlander at 2222. 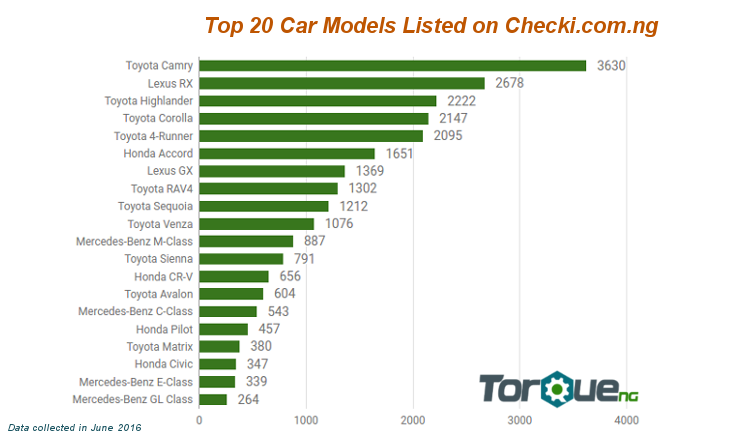 Most Popular cars on Carmudi
In terms of automotive brands, the chart below shows the most popular listings on Carmudi’s website by marketshare. Compared to Checki, Toyota remains the brand with the highest share of its 24,768 listings with a share of 44.2%. But Honda 12.3% swaps places with Lexus 8.4% and Nissan is ranked 4th followed by Mercedes-Benz. The same brands feature in the top 10 for both sites except for mazda which makes the cut for Carmudi, but just misses out losing to Infiniti for Checki. 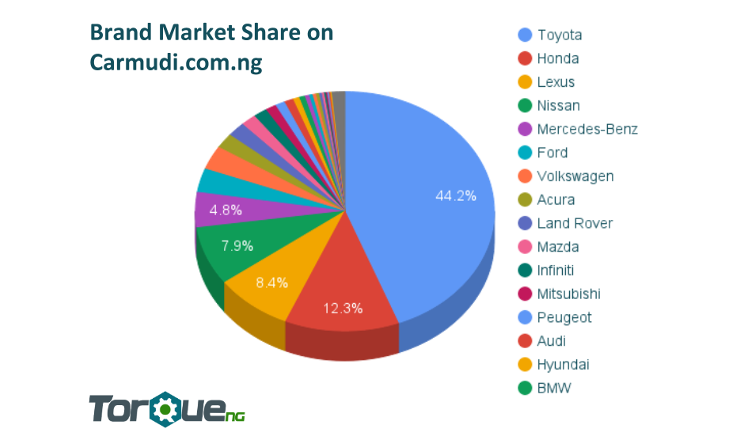 Looking at Individual car models, the chart below shows that just like at Checki, the Toyota Camry still tops the rankings for Carmudi with 2634. But the subsequent models are ranked quite differently. Here Honda Accord is ranked second with 1650 followed by the Toyota Corolla. Another noticeable difference is Mercedes-Benz which has four models ranked in the top 20 for Checki, but only one model for Carmudi. 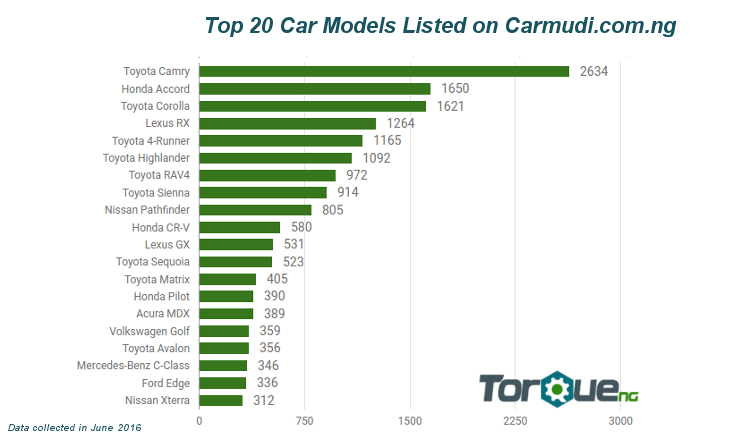