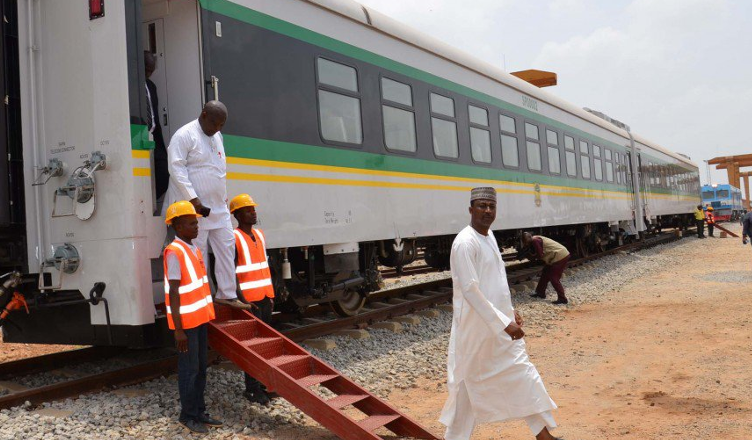 Nigerian railway is slowly getting the modernization it needs. In July 2016 President Muhammadu Buhari Inaugurated the Long awaited Abuja-Kaduna Standard gauge rail line marking the first commercial operation of Standard gauge service in Nigeria. Prior to this the existing rail lines in Nigeria have been of the Narrow gauge variety. More on the difference between the two later.
The 186km Abuja-Kaduna Line is part of the railway modernization initiative which is aimed at replacing the existing narrow gauge rail with a wider standard gauge rail that can handle higher speeds and heavier cargo. The initial contract was awarded to China Civil Engineering Construction Company (CCECC) for a Kano-Lagos standard gauge line in 2006, but the project was broken down into sections due to cost concerns and the contract re-awarded to CCECC for the Abuja-Kaduna section as the first phase of the project.
Project Construction
Construction started in 2011 and was completed in December 2014, However unexpected delays prevented commercial operations until June 2016. The project is managed by the Nigerian railway corporation (NRC) which runs scheduled trips between Idu industrial area in Abuja and Rigasa in Kaduna. The line runs adjacent to the Abuja-Kaduna-Zaria Expressway as shown in the map below.

Train Journey vs Car Journey
Blogger Fredrick Nwabufo documented his round trip journey from Kubwa, Abuja to Rigasa, Kaduna here. From his account the journey took approximately 2hrs one way. This is comparable to the google maps estimate of 2hr 15mins drive time in a car. There are still issues with the service like frequent delays and no show security officers, but it was cheap ranging from N400 for the cheapest ticket to N900 for first class and the ride was smooth. For a similar journey in a car, lets take a hypothetical toyota camry which has a fuel economy of about 30mpg or 12.7km/L. This will result in a fuel consumption of about 14L for the 180km Journey between Kubwa and Rigasa. At N145 per Liter, that’s N2055 in fuel costs. This was just a fun exercise as the car offers greater degree of flexibility and privacy.
What this means for Car owners
If ridership picks up on this train route, there would be more open spaces for people who want to drive. This impact might not be as significant on the Abuja-Kaduna route as it would be on the planned Lagos-Ibadan standard gauge line, but it does take some cars off the road. The biggest impact will be on cargo transport. As more and more cargo move to rail, there would be fewer trucks taking up space on the nigerian highways.
Difference between Standard and Narrow Gauge rail
The gauge of a rail is the measure of the track width of the rail line. A narrow gauge rail is 1067mm wide while a Standard gauge is 1435mm wide. The wider track of a standard gauge is what allows for higher cornering speeds and higher load capacity. The illustration below gives a good visual comparison. Trains on narrow gauge rail are usually limited to an average speed of 35km/hr for safe cornering while Standard gauge can reach 100km/hr and over 200km/hr for High speed rail. The Abuja-Kaduna lines seems to be averaging about 93km/hr. Moving the Nigerian railway to standard gauge will allow for increased capacity and faster travel times. More on track gauge here.
Title Image source: dailypost.ng