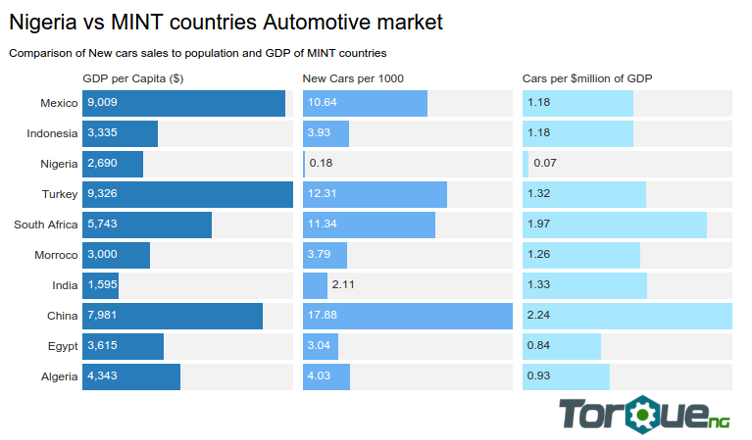 Fidelity International coined the acronym MINT countries in 2011 as a group of the next developing economies to watch. The term is an acronym for Mexico, Indonesia, Nigeria and Turkey. Former Goldman Sachs economist Jim O’Neill also hammered on the idea as he coined the BRICS( Brazil, Russia, India, China, South Africa) acronym. We are going to compare these four countries on a couple of different metrics relating to the car market and deduce where Nigeria stands. Other countries were also included in this comparison to give some perspective.
An Under-performing Car Market
From the above chart, one can see that Nigeria has the lowest GDP per capita of the four MINT nations. With a GDP per capita of $2690 compared to $3340 for Indonesia, $9009 for Mexico and $9330 for Turkey. But the more telling figures are to the right. Looking at new car sales for every 1000 people, Nigeria achieves 0.18, compared to 3.93 for Indonesia, 10.64 for Mexico and 12.31 for Turkey. This gives a picture of the relative size of the new car market. Using the cars per 1000 people and assuming Nigeria matches the Next lowest number on the list which is India at 2.11 New cars per 1000 people. This would mean Nigeria’s new car market would have to grow to about 364,000 units a year instead of the current 32,000 units. At this assumed volume, Nigeria becomes a viable market for manufacturing to support multiple car makers. 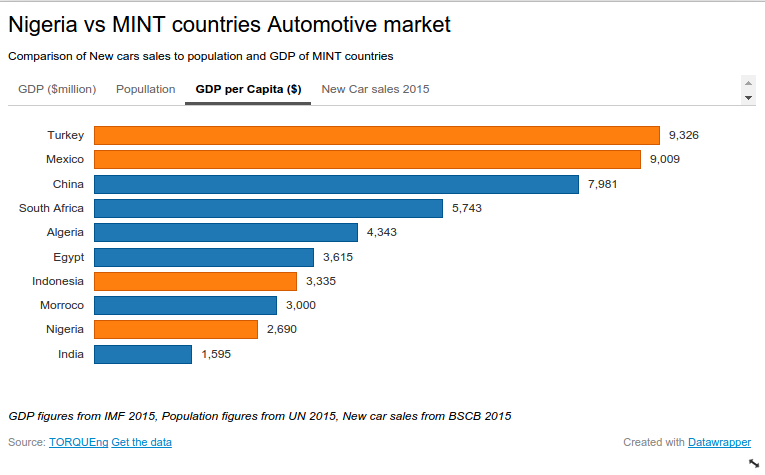 Another telling metric is the last column for Cars per $million of GDP. this shows a function of how the car market is performing relative to the economy. You can see that most countries on the list are around 1 unit per $million of GDP. But Nigeria is at .07 units. This shows a really poor performance of the market relative to GDP. This number would have to be raised to near 1 unit for Nigeria to show a healthy local automotive market. To get there, Nigeria would need to sell between 400,000 and 500,000 units a year. 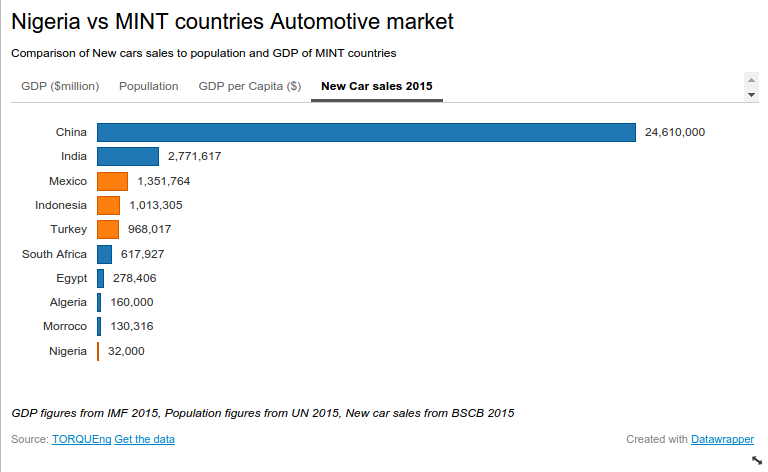 What does all this entail?
Nigeria does have potential to become a major car market, but our policy makers are putting the cart before the horse and setting archaic policies that are not being properly scrutinized by the Nigerian media. The focus should be on creating latent demand, which involves car retailers educating the public on New car benefits and Finance institutions creating innovative and easy to understand finance schemes to enable people to embrace new cars instead of used car.
The policy of restricting imported used cars to force people to buy new cars favored by the government and all the automotive assemblers in the country is counter productive. The domestic volume is not enough for all the plants to be operated profitably. Mexico, Indonesia, and Turkey all have thriving local automotive industries and each achieves this differently.  But the common thread is they were able to grow the local volume relative to the size of their economies.
In future articles, I will look at the approaches taken by the other 3 MINT countries as well as some additional countries and lay out a plan for achieving the volumes necessary to sustain a viable automotive manufacturing base in Nigeria.