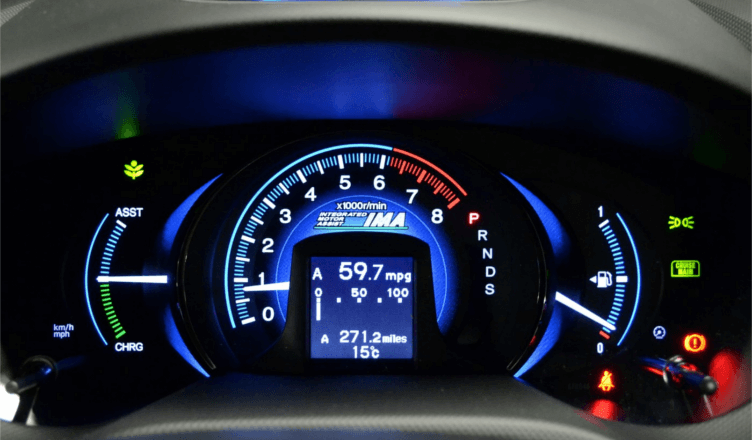 For many Nigerians fuel economy is very important especially since the deregulation of petrol, but there is always a challenge is figuring out how to measure one’s actual fuel economy or consumption. To tackle this problem we will look at a couple of options to accomplish this.
Using the Trip Computer
The easiest way to deduce your car’s fuel economy is to use the in dash fuel economy readout that most modern cars are equipped with. Your car’s readout would come in one of 3 formats. mpg (miles per gallon), L/100km (liters per 100km) or km/L (kilometers per liter). Some cars let you toggle between formats. The mpg format comes in cars imported from the United States or the UK, while the L/100km format comes in cars imported from Europe. More explanation on these formats later in the article.
The above image shows a car displaying an average fuel economy of 35.1mpg for a trip of 213miles. This means that the car used about 6 gallons of fuel to travel 213miles. The higher the mpg number is, the less fuel the car uses. The lower the number, the more fuel the car uses. although trip computers are not always accurate, they do provide a quick and easy way to figure out your fuel economy.
Manual Measurement
Since most trip computers tend to overestimate their fuel economy readouts, you might be using more fuel than is being indicated on the display. One way to get a more accurate measure is to take a manual measurement. however this process is more tedious. The steps involved are as follows;
This would give you an accurate fuel economy measurement and can be done on cars with an analog trip meter as well as digital. The approach to the calculation will vary based if you want mpg, km/L, or L/100km.
Different measurements for different regions
In the 2nd paragraph I talked about the three measuring formats, mpg, L/100km, and km/L. I’ll explain the differences below;
mpg(miles per gallon)
This measurement unit is the standard in the United States and the UK. However there is a difference between the two. The US unit uses US gallons which is equal to 3.78 Liters while the UK unit used British gallons which is 4.55 Liters. Therefore a car with 35mpg(US) is equal to one with 42mpg(UK). Since most imported used cars in Nigeria come from the US, most cars in Nigeria will have mpg(US) as their format.
L/100km
This measurement unit is the standard for all European market cars except the UK. It uses metric units and is easier to understand. For example, a car is rated at 7L/100km. This implies that the car used 7Liters of fuel to go 100km. Very straight forward. The higher the number, the more fuel the car uses and the lower the number, the less fuel it uses unlike the inverse relationship for mpg. This format is also adopted by China, South America and Australia. Nigerian cars imported from these regions will have this format.
km/L
This measurement unit is a metric version of the mpg format. It is used by only 3 countries Japan, India, and Malaysia. For example a car with a reading of 20km/L implies that it will travel 20km on 1L of fuel. Since the countries that use this format are only a handful, it is the least popular of the three.
Converting between measurements
If you do wish to convert between mpg(US), mpg(UK), L/100km, or km/L there are various tools that can help you. this site is a good utility.
Now you understand fuel consumption measurements and most importantly How to measure your fuel economy.